PayU wants to give up PPI licences, consumer wallets

BENGALURU: Naspers-backed digital payment entity PayU is in the process of consolidating all its prepaid payment business under one umbrella and surrender all the other PPI licences it has. PayU wants to position itself purely as a merchant aggregating entity, moving away from the consumer-facing wallet business.

While PayU is returning the licences because of the Citrus acquisition in 2016 which caused them to have multiple licences, the shift towards a pure play merchant business from a consumer wallet one could be reflective of the trend expected in the digital payments space. “PayU had a legacy licence with a bank which we are in the process of surrendering, hence we will consolidate all the PPI business under PayU which will be the licenced entity and the branding will be that of Citrus,” said Amrish Rau, chief executive officer of PayU India. 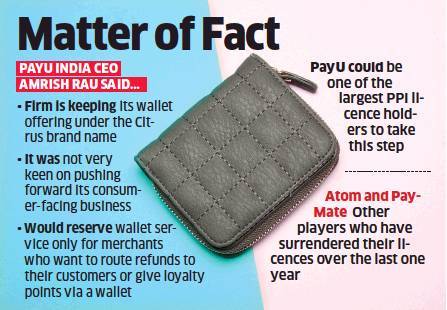 PayU Money has been circulating a mail among its users informing them that their wallet service is closing down and users can either use the funds they have in the wallet for shopping or transfer it back to their bank account free of cost.

“We would like to inform you that the PayUMoney wallet issued by RBL Bank will be closing its services on January 31, 2018,” read the mail, of which ET has a copy.

While PayU is keeping its wallet offering under the Citrus brand name, Rau said the company was not very keen on pushing forward its consumer-facing business and would reserve the wallet service only for those merchants who would want to route refunds to their customers or give loyalty points through a wallet. While PayU could be one of the largest PPI licence holders to take this step, players like Atom and PayMate have also surrendered their licences over the past year.
Atom, which deploys PoS terminals at merchant outlets, wants to focus on the payment gateway business. Similarly, PayMate is also pushing into optimising buyer and supplier payments in the business to business space. “I believe with the rapid boom of UPI payments and also with strict KYC and capital norms for wallet players, their unique use cases stand challenged and the value of a wallet licence stands diminished,” said Ajay Adiseshann, founder of PayMate.
Atom did not find much value in the PPI licence and had applied to the central bank for surrendering the licence as soon as the RBI framed rules on returning of the licence in 2016. “We had got the licence in 2010 but in 2016 August we had reached out to the RBI to surrender the licence and by 2017 the surrendering formalities got fulfilled,” said Dewang Neralla, CEO at Atom Technologies.
Source by:- gadgetsnow
Share: